The area surrounding the black hole is permeated with a strong magnetic field, and the intense gravity that it creates shapes much of the hot gas’s behavior. The bright areas might be caused by an extra powerful magnetic field, which squeezes the material harder and causes it to glow brighter; however, given all the uncertainty in interpreting images, we can’t tell whether these glowing regions are really signs of significantly brighter locations or not.

Images like this are extremely important to astronomers. In the 1980s it started to become clear that all big galaxies had supermassive black holes in their centers, and it was decades later than technology got good enough to see stars around our Milky Way’s black hole moving as the incredible gravity kept them in thrall — it was those observations that told us the black hole has four million solar masses.

To see anything on the scale of a few tens of millions of kilometers, or even just a billion kilometers, was previously impossible. 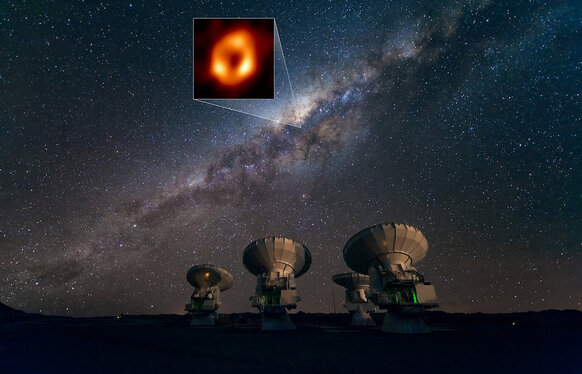 The image of Sgr A* taken by the Event Horizon Telescope indicating its position in the sky in Sagittarius over a few of the dishes in the ALMA observatory, one of the sites used in the EHT. Photo: EHT Collaboration